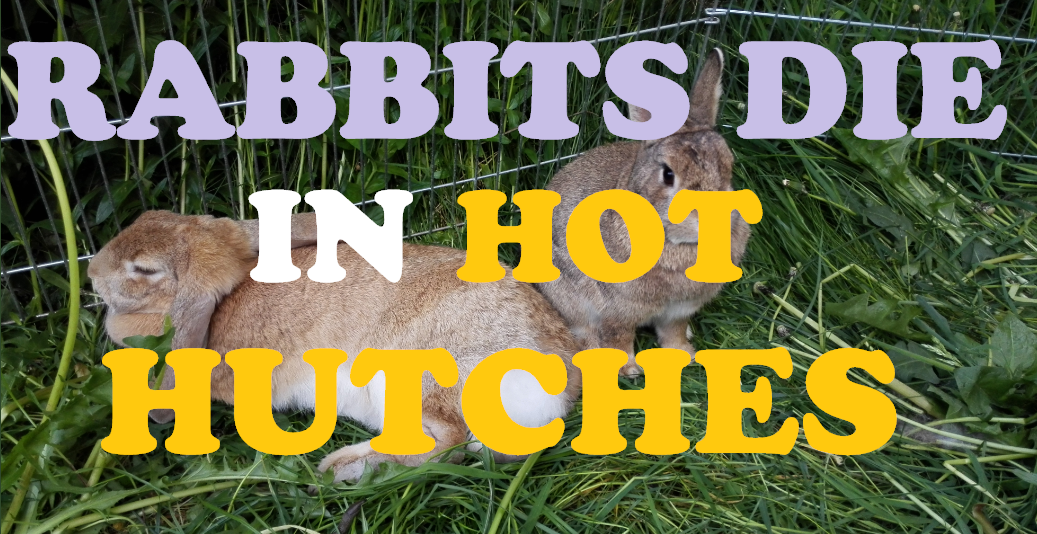 Keeping rabbits cool in summer can be daunting.  This has been the hottest week of the year in the UK, and with temperatures pretty much soaring worldwide in the Northern Hemisphere (sorry, Oz), it’s important to keep bunnies safe from sun and heatstroke too!

We all know that dogs die in hot cars, but rabbits regularly die in hot hutches as well, especially young rabbits (less than a year old). Lack of ventilation, hutches placed in direct sunlight, and the ammonia from a hutch that hasn’t been cleaned in a while all take their toll on rabbits. I’m not being OTT here, these are all things I’ve learned from having tons of buns for years. Here’s how to keep bunnies cool and safe and happy and snuggled in all this hot weather we’ve been having:

Don’t:
Leave rabbits in a hutch on hot days. They need to be able to move around and find shade (or a cool breeze) and additionally, they panic if they feel trapped, which will only make them hotter.

Assume their water bottles are sufficient. Rabbits have been not drowning in puddles for thousands of years, and a bowl of water that they can put their face in to cool down will really help them out. Be aware that they might knock it over, and refill as needed.

Put sunblock or other human sun protection products on rabbits:  It sounds good in theory, but please never do this.  Rabbits will lick it off and ingest it, and sunscreen’s not good for them, and it won’t reach their skin in any case.

Leave hutches in direct sunlight. Even when the rabbits aren’t in them, they will get hot and cause the ammonia from their urine to degrade. This can cause a potentially toxic vapour that can suffocate rabbits when you put them to bed.

Forget to clean the hutches out at least once a week in summer. The temperature and the amount of insects around means that it’s easy for a hutch to acquire maggots, which will lead to bunny fly strike, a deadly disease.

Ignore warning signs: If your bunny is visibly too hot, not really moving much, breathing heavily, and clearly uncomfortable, you need to take action (see how below).

Never, ever, ever touch a nest with newborns (younger than 8 weeks) baby rabbit kittens in it:  Even to move them somewhere cooler.  If the mother smells the babies have been interfered with by anyone who isn’t herself, she will reject them and they will die (yes, you can try to hand rear them, no, it often doesn’t work).  The mother will move them if she thinks they’ll have a better chance of survival, and she comes from a long line of rabbits who didn’t fail to care for their young (or she wouldn’t be alive herself), trust her to know what’s best for her babies, unless she’s got brain damage.  Rabbits have very good mothering instincts that are better than those of most human mothers.  Additionally, if you go near the nest while she’s around, she will attack you very viciously.  Put an ice block or a frozen bottle of water next to the nest, but not in it, and let the mother move it herself.  The only exception to this is if one of the babies needs a vet.

Do:
Get them a good sized enclosed rabbit run and put them out all day in hot weather (check they can’t dig out, or make sure your garden fence/wall will stop escapes if they do, if you’re at work all day). Leave the run in the shade and remember the shade changes direction as the sun changes position in the sky. An old doormat or cardboard box over one corner of the run will provide shade.  Don’t forget to give them water in the rabbit run!

Freeze some ice blocks for them and put these in the rabbit run so they have something cold to lie next to if they need it.

You could also put bricks in the freezer (if you remember from my article on keeping bunnies warm I mentioned putting a brick in the oven then put it in the rabbit hutch at night) and put these out in the hutch to cool the air in the hutch.

Get them a water bowl as well as their bottle (or a second water bowl) so that they always have some water, and check it every few hours if it’s a really hot day. Water is the most important thing for keeping bunnies alive in hot weather. If you do nothing else from my article, do this.

If bunny gets too hot: Emergency bunny first aid for heatstroke:
If your bunny is visibly uncomfortable from the heat, get a jug or bucket of water and get the bunny wet. Avoid the face and ears, you just want to get their body wet to increase heat loss. If the bunny doesn’t jump up and try to run away (they really don’t like getting wet), check the temperature of their ears.

If the bunny’s ears are hot and the bunny is not moving much, breathing heavily (or not breathing), and generally unresponsive, they probably have heat stroke. It is preceded by heat exhaustion, which stops them raising the alarm about their state (this is true of humans too, although in people, the face tends to go red and they can even stop sweating).  This is more deadly to small animals than it is to humans (and it’s pretty dangerous to humans). At this point, you need to make an emergency appointment with the vet and get your bunny the care he needs to survive.

Personally, I wouldn’t waste any time, and I’d get a sick bunny to the vet (any vet) as soon as possible because they are stuck with a fur coat and feel the temperature a lot more than we do, they don’t have a very good cooling system and they’re not designed to be above ground trapped in a hot environment in summer weather, usually they’d be in their underground burrow at this time of day in the summer, chilling out with their friends.  We have, over centuries, forced them to live in our environment for our own entertainment, the least we can do is try to make it comfortable for them.

I am a twentysomething travel, photography and beauty blogger who occasionally writes about other topics. Within travel, I tend to write mostly about Europe because all the other travel bloggers seem to write about South East Asia. As a writer, I have written articles that are published in Offbeat Bride and on Buzzfeed, and as a photographer, I have taken photographs that are published in local and national news outlets in the UK. I have a blog at www.delightandinspire.com View all posts by MsAdventure

This site uses affiliate links. Some links are affiliate links, some are regular links. All opinions are my own and I do write positive and negative reviews depending on my honest opinion. See "about" for more info on the 3 brands I work with. This statement is displayed on every page to make sure you can't miss it.
Follow Invoke Delight and Inspire on WordPress.com