Sorry I haven’t posted anything in a little while. It’s been an extremely difficult month, then last week I finally had a week where everything seemed ok, although I was purposely avoiding the internet last weekend because I can’t stand seeing Mother’s Day crap all over the place (even before my parents died, Mother’s Day and Father’s Day have always been the worst four days of the year. I wish the UK and US holidays would synch up so I only have to go through half the heartache each year… guess it’s another argument for emigrating). I was going to catch up with everything after that was done. But then, the whole universe had to fuck off again because our oldest bunny, Cleo, died on Sunday. She had just turned 12 years old.

She died peacefully, in her favorite spot in the living room; beside the food bowl. Barely half an hour earlier, my Dearest had fed her some carrots. She’d been having a bad morning but she was still wandering around and showing an interest in all her favorite things, right until the very end.

We have buried her in the garden with Banacek, because they were a bonded pair before he died.

The strangest thing is, about three nights ago, I went to the bathroom and when I came out I looked in on Timmy in his bedroom, and I swear Cleo was sat beside him. It was the weirdest phenomenon. I don’t know if it was wishful thinking or a trick of the light that my brain interpreted or what, but it wasn’t just a shadow; it was a brown rabbit with pert ears and bright eyes, snuggled up with Timmy. 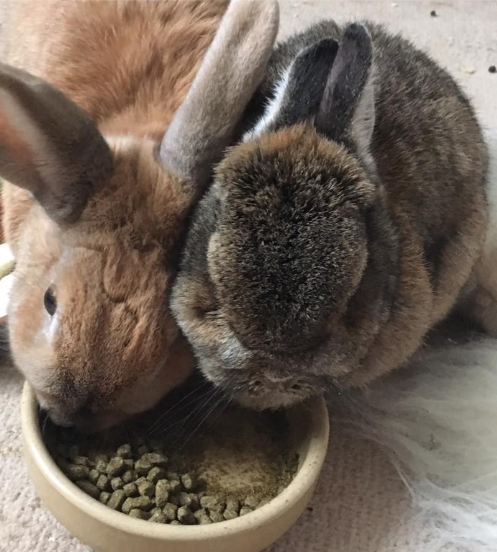 Night night, little bunny. We will miss you so much.

So we weren’t sure if we were going to get another rabbit after losing Banacek – surely it’d have to be a pretty special new bunny.

Two weeks ago I had to go to Pets At Home to get Poppy a corner litter tray because she’s destroying her hutch by insisting on using it as a toilet (all our other outdoor buns do it in their rabbit runs). That’s when I first saw Timmy.  Soft, snuggly, adorable, special Timmy.

He was a beautiful orange colour with Banacek’s eyes and ears, and cute white patches on his front paws that made him look like he was wearing socks. I thought nothing of it – Cleo was still listless and mostly sitting around the house at this point. She was in no way ready for a new friend and neither were we – it was only about a week after Banacek had died. I took a good look at Timmy and noticed he had done some of those yellow gloopy poos that Banacek had done just before he died. I informed the staff and they said they’d keep an eye on him. I went home disappointed because we really shouldn’t get another rabbit right now, especially one with potential digestive problems.

Because of Poppy’s little “problem” I had to do a full cleanout of her hutch on Monday, and I used up all the hay and most of the sawdust, but I still needed more hay to make her upstairs sleeping area warm and cosy (and edible), so at 6pm I found myself driving over to Pets at Home again to get a bag of hay.

Timmy was still there, in all his beautiful snuggly orangeness, looking very interested in his hay. I had to collect my husband from work immediately after getting the hay, and I told him that the cute bunny was still there who I’d seen before.

The next morning, I tried to put him out of my mind, but when I came back from dropping my Dearest off at work, I then had to put up with Cleo acting very out of sorts – she was running laps around the living room and leaping in the air and pulling my blankie off me (I was cold) and trying to climb on the sofa. These are things she doesn’t usually do. She was trying to get me to play with her more than normal. So I tried, but I couldn’t follow her through the tunnels and hiding places we’ve made for the rabbits to play in. I scooped her up and carted her off to Pets At Home to see if there was an appropriately adorable bunny up for adoption.

I was surprised to see that Timmy, with his one up ear and one down ear, was still there.
We introduced them and he really liked her but she was scared and running away, so I decided to bring her back later in the afternoon. This time, Timmy went straight to her, and he snuggled up with her in her pet carrier.

They didn’t separate the whole time they were around each other.
When I took Cleo back to the car (so I could come back and complete the adoption paperwork and buy the sawdust I forgot to get earlier in the week), Timmy looked heartbroken and started attacking the door to his enclosure to get back out again. I came back from the car, and another person was there trying to adopt Timmy. I was all like “oh hell no he’s mine bitch.”  Actually, I just said “I’m sorry, but he’s coming home with us, he’s just been introduced to my other rabbit and they loved each other.” but she acted like I’d slapped her with the rabbit.  If she’d got there first I would have just been happy for Timmy that he was finally getting adopted – that’s not an empty promise, it’s happened before with 2 different bunnies that I intended to adopt.  Sometimes it’s not meant to be, but this time, it was.

We brought him home and they’d told us to just put him in his hutch the first night, but he looked so lonely and vulnerable that I put Cleo in with him. She disagreed with being in a hutch (she hasn’t been in a hutch in over 2 years) so they both ended up hanging out in the living room until bedtime.

At night we put him back to bed in his hutch and in the morning, I put him and Cleo into the rabbit carrier and took him to the vets for his check up and vaccinations. Apart from when we’re in bed (when we have to put him back in his hutch until we’re sure he won’t fight Cleo) they’ve been inseparable ever since. 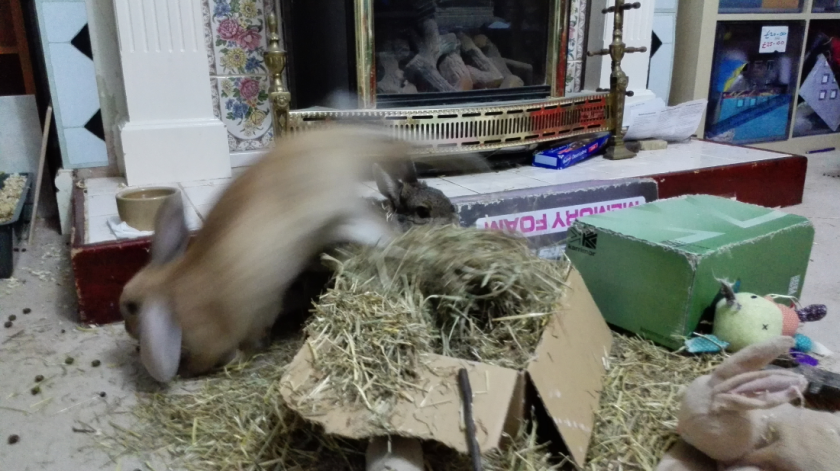 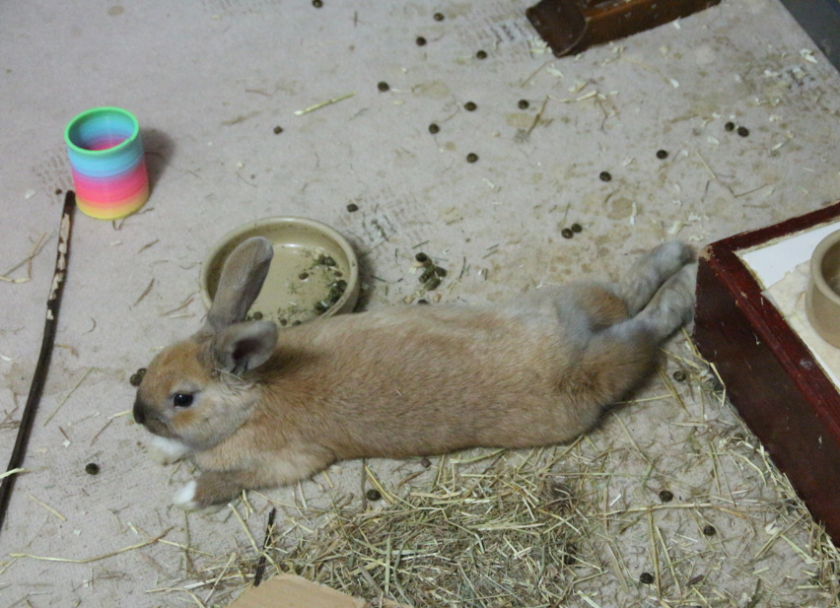 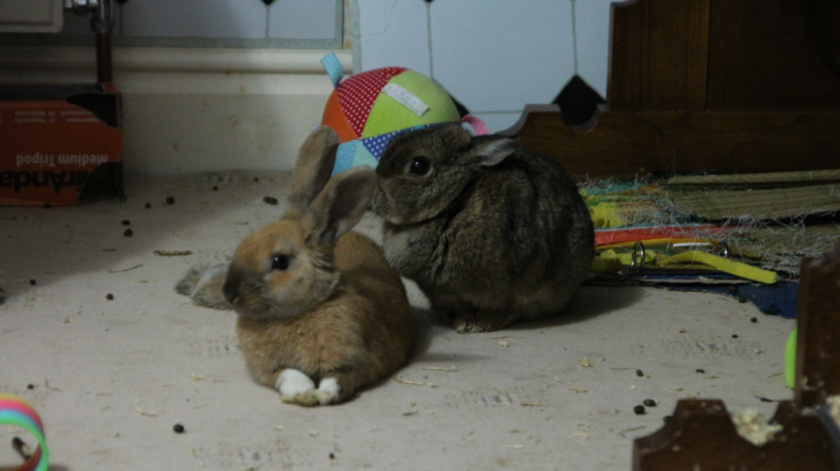 So far, his interests seem to include running around REALLY FAST, pooing everywhere (they’re the size of freaking marbles WTF?!?!) and humping Cleo.  So I put this bunny romper suit on him so he definitely couldn’t get Cleo pregnant, because he can’t be neutered for a couple more months (he’s 4 months old and the romper suit is to stop them chewing at stitches but it covers the right places): 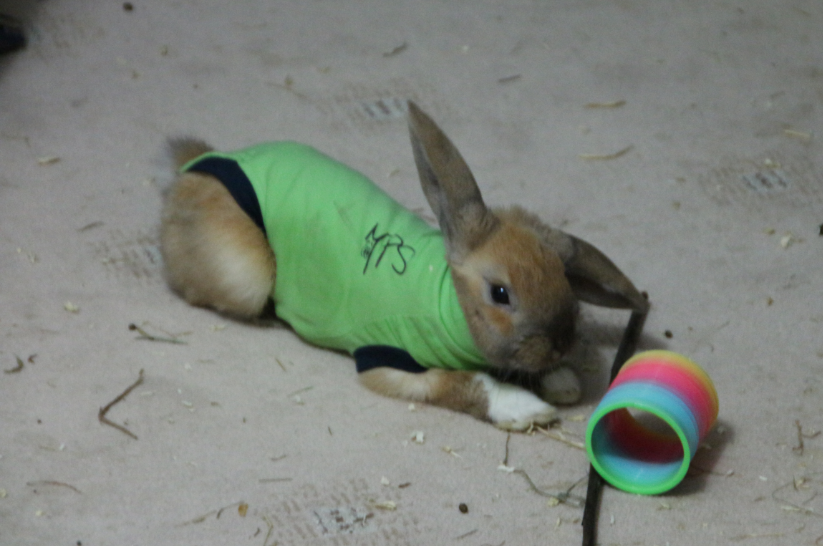 He doesn’t like the romper suit, and he runs around less while he’s wearing it.

I’m in the middle of editing some videos of him and I’ll upload them all to Youtube as soon as they’re ready. 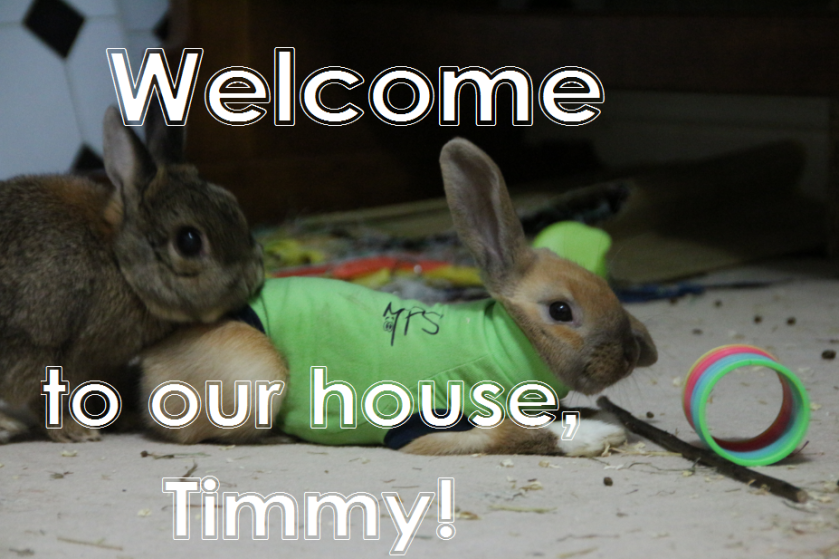